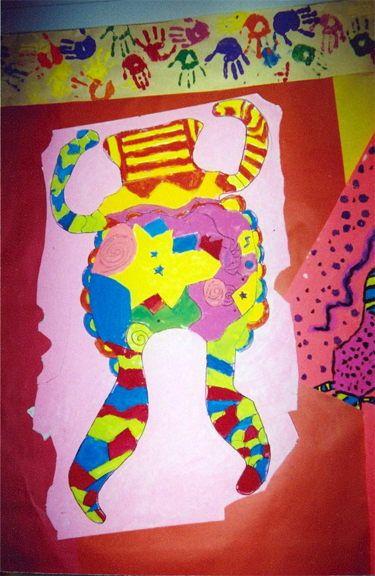 To become familiar with the life and art of artist Keith Haring.

To identify, discuss, explore, and create a variety of lines, patterns, space, presentation, and scale.

To successfully work collaboratively on a project that emphasizes creative expression.

Slides
Books
Reproductions of Keith Haring's art: limited viewing of the video, "Drawing the Line" --- Teachers should preview this video before showing it to the class.

Large pieces of Styrofoam
Black markers
Tempera paint (often tempera paint chips off of unprimed styrofoam, so you may want to try a test strip beforehand. If you need a primer, you can use shellac, wall primer, or gesso.)
Painting supplies (brushes, buckets, water, sponges, pallets, paper towels...)

STEP 2
Inspired by Haring's work, students create their own series of line drawings and figures.

STEP 3
One drawing per three students was selected to be enlarged on the styrofoam with black marker.

STEP 4
In groups of three, color and patterns are added to the figures with tempera paint.

STEP 5
Backgrounds are also painted and pattern details are added.

STEP 6
Display and discuss our completed figures in the hallways!

ARTICLE PUBLISHED IN SCHOOL ARTS MAGAZINE, January 2007
Each year our fourth grade students study contemporary art from the twentieth century. One American artist that our students enjoy is Keith Haring . Our children love the symbolic figures, the movement, the energy, the vitality, the spirit, and the excitement that he created in his art. Haring was driven by a strong desire to communicate and developed his own language with his bold lines, objects, figures, colors and patterns.

We began our study of the art of Keith Haring by watching the video documentary of Keith Haring's "Drawing the Line". Also slides, books, and reproductions of his art were shared with the fourth grade classes. After watching the video, we discussed his strong drive to make art even in a New York Subway. Fourth grade students are very curious about Mr. Haring, his art and especially his subway drawings. We learned that one of Haring's major ambitions was to return art to the public. Hence, his subway art was created. After Keith explored his creativity in the New York City subway, he began showing in galleries and his art took off successfully in the U.S .and around the world.

Our art department was given several large discarded pieces of styrofoam board. Using these boards, they became our black boards similar to what Keith was using in the subways. Inspired by Haring's line drawings our students made a series of their own line and pattern drawings of figures. One drawing per three students was selected to be enlarged on the five foot tall styrofoam boards. Our eager, young subway artists collaborated in groups of threes on this project. First the out line of the enlarged figure was applied with a black marker on the board. Next color was added to the figure and to the background with tempera paint. On the next art session, bold lines and patterns were added to the subway mystical beast and to the area outside of the creature. Students focused on filling the entire board with color, lines and patterns to complete the figure compositions. These creative characters took on a life of their own. Some of our groups came up with amusing titles and stories to go with their new creatures. This project, from introduction to completion, took (five) fifty minute class periods.

Our hallways took on a new personality after these colorful and exhilarating figures were displayed.

OBJECTIVES
1. To expose our students to the life of and work of 1980s artist, Keith Haring.
2. To have children learn how to work collaboratively on a project that emphasizes creative expression and teamwork.
3. To give our students the opportunity to work on a large area, explore ideas of scale, space, and presentation.
4. Students will learn how to identify, discuss, and create a variety of lines and patterns.

If you could think of a name for your creature what would it be?

What have you learned from working in a group?

What have you learned from Keith Haring's art?