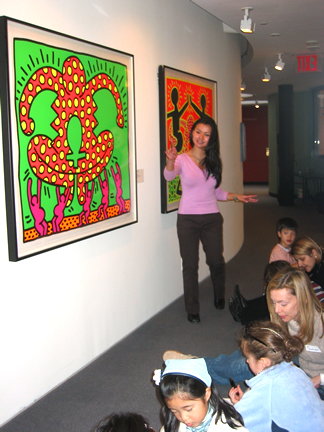 After exploring The Aztec Empire and an exhibition of original works by artist Keith Haring at the Solomon R. Guggenheim Museum, students from throughout New York City created their own digital animations in Flash MX inspired by the works on view at the museum.

To inspire students to create an animated symbols for the web using the computer animation software program Flash MX in order to express a duality that has meaning in their own lives.

WEEK 1
Introduction to Flash MX
First assignment: ask students to draw a symbol that represents where they are from.
Use this symbol as a point of departure for Flash exploration.

Introduction into Keith Haring's work and interest in ancient cultures and civilizations, and the meaning of signs and symbols.

Universality of symbols, discussions about the concept of duality.

WEEK 2
Serpent as a Motif
How does this symbol function in the Aztec society? How does Keith Haring use snakes or serpents in his work? Can you think of other ways that the serpent is used in our culture?

The serpent is a symbol that is at once threatening or villanous or can be used as a symbol for healing, as in the "staff and serpent" symbol for the medical profession. Ask students to draw or sktech a serpent based on Keith Haring's drawings, then begin a frame-by-frame animation in Flash MX.

WEEKS 4, 5, 6, & 7
Flash instruction and creation of animated symbols to express the concept of duality.

How can you create a symbol that represents an abstract concept?

Could these symbols be understood by someone who doesn't speak English?

How can these symbols be more easily understood? How can they be more complex?

Can you try to draw a symbol that might communicate the same information but in a different way?

How can we communicate something as a symbol without being narrative?

How can an image express a duality?

In what ways can your symbol incorporate interactivity?

An internationally renowned art museum and one of the most significant architectural icons of the 20th century, the Guggenheim Museum is at once a vital cultural center, an educational institution, and the heart of an international network of museums. Visitors can experience special exhibitions of modern and contemporary art, lectures by artists and critics, performances and film screenings, classes for teens and adults, and daily tours of the galleries led by experienced docents. Founded on a collection of early modern masterpieces, the Guggenheim Museum today is an ever-growing institution devoted to the art of the 20th century and beyond.
View all posts by Guggenheim Museum →